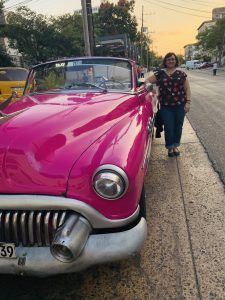 I had the opportunity to travel to Cuba for 3 nights in March, 2019. Since I’m celiac, I was required to eat gluten free in Cuba.  I was pleasantly surprised that it went so well. The good news is I did not have any issues with being glutened. I’m so pleased to report that I experienced no hidden cross-contamination.  Thank goodness!

I went to Cuba as part of a tour. We were in the greater Havana area. Currently, cruise ships that start in the United States are not able to port in Cuba, but tours are still allowed/legal. Travel to Cuba is legal for Americans under the regulation, “support for the Cuban people.” You may read more about this regulation.

I will say my trip started with fear about the dining situation. I was afraid I would have an issue being able to eat safe gluten free food so I packed a bunch of items. The fear continued when on the plane they said no food is allowed to be brought into the country. Awesome, I thought, as I had a ton of food. Thankfully, my food wasn’t an issue. No one cared.

Cuba was so unexpected

More people spoke English than I expected. While my tour guide did quite a bit to assist with my needs, my Spanglish got me by. I have no idea why I didn’t have my Spanish language allergy card available as a reference in the hotel buffet, though. I did eventually sort out my need to eat food that was from the kitchen and not on the buffet. (To avoid cross contamination.) That conversation was a tough one though.

So I had no idea really what food to expect in Cuba. I did learn that Cubans do not really feel they fit in any nearby culture- they don’t feel, or eat, Caribean, they don’t feel/eat Latino. Our guide indicated that perhaps their closest cultural allies were that of Puerto Ricans. I was shocked, though, how little spice was in the Cuban food, and there were no chips and salsa to speak of.  (Am I alone in thinking we would have been served chips and salsa like in Mexico??) 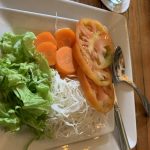 As a general rule, Cubans primarily cook with cumin, onions and garlic. Before I left for the trip I read that there weren’t many vegetables served in Cuba. The salad pictured on the left was one that was served most often when we were offered one. It was always served with a very bland dressing, very similar to oil and vinegar.

While the food was bland, it was also tasty and more importantly I didn’t get sick. What I have found is that outside of the U.S. food isn’t fried as much and there isn’t as much cross contamination. There isn’t hidden wheat in the food. 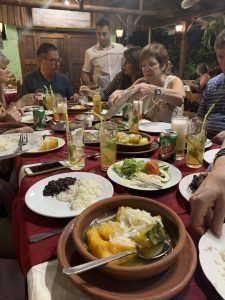 Do you have any questions about eating gluten free in Cuba, feel free to ask in the comments below. I did discuss this trip on the DCL Podcast, which you can listen to here. 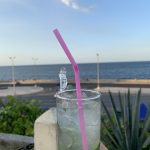 ps, the Mojito, the official drink in Cuba, is safe to drink as a Celiac. The unflavored rum served in Cuba is gluten free. I didn’t look into or try spiced or flavored rum! [Here is a fun 5 second video of the making of the Mojito!] pps, the Cuban Government regulates the price of rum and coffee sold on the island, and as such, it’s the same price no matter where you buy it!

Safe travels and don’t forget to Pack your Pixie Dust✨!

When I’m traveling, I always have RX Bars and other snacks available in case I am in a situation where I’m unable to eat. I feel like RX bars are a good meal alternative when I’m in a pinch.