I, along with my son and friend Alexic recently experienced the Good Morning Breakfast with Goofy & His Pals at Ravello in the Four Seasons Resort Orlando at Walt Disney World®. (Wow, that’s a mouthful!) This is our review of the Four Seasons character breakfast with appearances by Goofy, Mickey and Minnie.

Note that while the last reservation of the morning can start at 11 a.m., the characters make their last rotation around the restaurant at 11:30.  When I called to make the reservation I was going to reserve 11 a.m. and I was advised that I would get more character time by arriving earlier.  I am so glad we received this message. 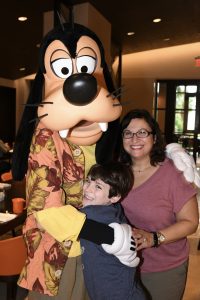 The service at the Four Seasons Orlando and at their character breakfast is always pretty terrific.

The Four Seasons character breakfast includes select pictures with a Disney PhotoPass Photographer (see below for more details), an extensive breakfast buffet, along with coffee and choice of either orange or grapefruit juice. (Neither of these juices are freshly squeezed.) 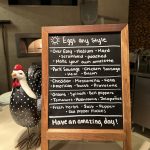 My friend Alexis and I both have celiac disease, so we asked to speak to a chef to request that our breakfast be prepared and brought from the back. The exception to this was the omelette station where everything at the station was gluten free. The chef did indicate that the waffles would have cross contamination with gluten in the waffle iron so we did not order any of those.

The chef prepared a huge fruit plate, sausage, bacon (regular and turkey although we didn’t ask for the turkey bacon and I don’t think either of us ate any of it), a HUGE plate of breakfast potatoes, and pancakes (which we were told were vegan.) It was all very good.

On a previous visit I was served 3 mini-chocolate muffins which I was told were made in house. This time they didn’t offer us any pastries but we didn’t ask either. We were also served safely prepared gluten free toast. The bread looked and tasted like Udi’s.

The gluten free food all came out pretty quickly. All of the food Alexis and I enjoyed was celiac safe.  Neither of us had any adverse reactions to this breakfast.

The Character Experience at Ravello

About 10-15 minutes later they come out again to do a tableside meet and greet with all the guests.  This is where you will take individual pictures with the people in your party and the characters. As is currently the case at the rest of Walt Disney World, hugging and standing for photos is allowed. The characters made about 3 total rounds during our character meal that took a little over an hour.

A PhotoPass photographer is present and included in your breakfast buffet meal.  The photographer will take any pictures of your family that you would like.  They are currently only taking pictures with Goofy, since it is his breakfast after all. They gave us a PhotoPass card for our pictures but I am not sure if we could have used our Magic Bands as we didn’t have them with us. 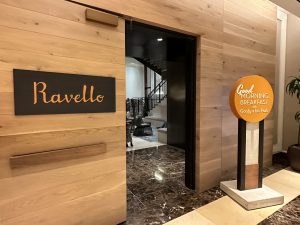 The breakfast comes with a four seasons price Tag

Like the rest of the Four Seasons Orlando, this dining experience is not inexpensive. It is a treat! The Four Seasons character breakfast was priced at $52 per adult and $32 per child for those 12 and under. (This is a good to note if you have a child between the ages of 10 and 12 years old, as children 10 and up become Disney Adults. You can keep your child a child a little longer at the Four Seasons.)

You can also add on Pressed Juices and Specialty Coffees for an additional charge. And, finally, breakfast at Ravello offers Bottomless Mimosas and Bloody Marys for $22 and $23 respectively. [I will say though that my cousin and I dined here once circa 2017 and we did reach the bottom of the mimosas…. I am not sure if this is a normal occurrence or if we had a unique dining experience.]

I would compare this meal, in food, experience and price, to the Breakfast à la Art with Mickey & Friends, at Topolino’s Terrace, located at Disney’s Riviera Resort. Up to $59.99 (but one day in January it was $45) per adult and $29 per child (for children 9 and under.)  Topolino’s is also one of the most difficult reservations to score at Walt Disney World whereas the Four Seasons Character Breakfast is definitely more accessible. For reference, I booked our breakfast about 2-3 weeks before we went.

See my previous post where we discussed our one night stay at the Four Seasons.

All good things must come to an end

Do you have any questions about our meal at Good Morning Breakfast with Goofy & His Pals at Ravello? Or have you been to this breakfast? What were your thoughts? Comment below.