Paris, France. My husband had to be in Europe for work and it saved his employer significant money for us to be in Paris for a few days before his work meeting. It was a remarkable adults only trip. While it was only 3 days, we hit all the major landmarks and really had a terrific time. 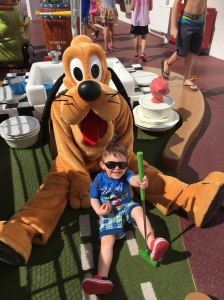 Disney Cruise aboard the Fantasy to the Eastern Caribbean. We had a great week. Traveling was my husband, son, and mom. We all really enjoyed ourselves. We upgraded our cabin to a concierge 1 -bedroom suite at the pier and really enjoyed the concierge benefits and service. If you’re interested in upgrading at pier, here’s the information on how to do that. This cruise was originally booked as a Royal Caribbean Cruise with some extended family. But the family members had to cancel and we moved our cruise to Disney. I just picked the week with the least expensive 7 night cruise on the Fantasy. We had a terrific time and were glad we made the switch. Disney offers so many activities for kids under 3.

Cozumel, Mexico. Secrets Aura.  I have friends that married on Leap Year. Each Leap Year they celebrate their anniversary with a bunch of their friends at a new destination. Most of the group stayed a week, while we were there 3 nights. It was a terrific short getaway for my husband and I that included a lot of book reading at the pool.

He’s free before he’s 3 Walt Disney World Vacation. Disney’s Grand Floridian Resort. The premise of this trip was that it was the last time my son could enter the parks for no charge (free) and could eat buffet meals for no charge. It was an amazing trip. However, it was our most challenging at Disney World with our son. He was one month shy of 3 and was very opinionated, plus a bit all over the place. I.e. one day he wanted to ride the train over everything else, until the train arrived, then he wanted nothing to do with it… But the trip overall was great. At some point you have to make a deluxe king room at the Grand Floridian work, even if it’s just a couple days. If you get one of the corner rooms you can hear the band and piano player play while you are in bed. It’s one of my favorite vacation memories of the year. 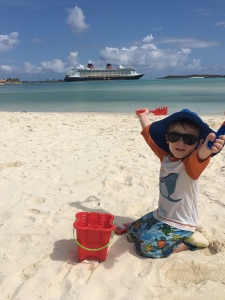 Disney Cruise aboard the Fantasy to the Eastern Caribbean. (Yes, we did this itinerary twice in 1 year.) This cruise was immediately following the DW vacation. That was the first time we combined both a land and cruise trip together and we really liked it. My mom joined us for the cruise and we all had a great time. We booked this cruise as a 5 year anniversary vacation for us and we were booked in a 1 bedroom concierge cabin. The concierge hosts really make it a remarkable cruise.

Fort Lauderdale. The Westin Beach Resort. I attended the Signature Travel Network regional meeting and spent 2 nights here. I had a whole 3 hours to myself before the start of programming and I did my best to enjoy my time. I was not overly impressed by the size of the pool for this “resort”, but I was very impressed with their gluten free offerings. I ate a convention meal, as well as 2 meals at the pool and a breakfast from room service. They even offer gluten free bread here. Anyone who eats gluten free knows this is a fun find.

Jupiter Beach, Florida. Jupiter Beach Resort. We were invited to a wedding for one of my husband’s friends. We honestly had such a good 24 hours at this hotel.  The food was great- very gluten free friendly. The beach was awesome, as was the pool and bar service. We really packed in a lot during this quick night away. I would definitely return here for a family vacation in the future.

Disney World. The Swan & Dolphin, and Disney’s Grand Floridian. I was thrilled to be selected to attend Disney’s Agent Education Program which is a 3 day training program held at their resorts. My husband and I added on an adult only quickie trip the 24 hours before my programming began. We really crammed in the fun. Our day included fun at Epcot where I was able to ride the new Soarin’ Around the World, as well as Frozen Ever After, plus we enjoyed the Dessert Party for the Star Wars Fireworks at Hollywood Studios. We never spent so little time in a hotel (the Swan.)  The next day we hit Downtown Disney – Disney Springs, which was all revamped before I began my training that afternoon. It was such a great trip. Part of our programming included dinner at Tiffins, in Animal Kingdom. It was a remarkable and memorable meal- I want to return here for sure.

Disney World. Four Seasons Orlando. I thought that I needed one more flight in order to secure gold medallion status with Delta Airlines for the year, so we booked this trip about 3 weeks prior to departure. Hurricane Matthew ended up pushing us back a day, but it still turned out to be an incredible 2.5 days away. We managed to enjoy some pool time at the adults only pool at the resort, spend the day at Epcot, have an amazing birthday dinner for my husband at Yachtsman Steakhouse, and catch Wishes (the Magic Kingdom fireworks) from the rooftop balcony at the Four Seasons. This truly is a luxury property. Their attention to detail puts them at the top of the list of Orlando hotels. No one compares.

Beaches Turks and Caicos. Sometime during the summer I decided that I needed one more family vacation for us. I booked us at this family resort and didn’t regret it. It is a large property, and they move a bit like they are on an island with no where to be, but we really enjoyed our 5 nights here. The resort offered many activities but we didn’t participate in many really. It was my goal to scuba dive here as it is included, but I had a nasty chest cold that wouldn’t go away. I did register though in case I was better, but it didn’t work out. We swam. For 5 days and nights, we swam. We loved the many pools and swam in 4 of them.  When we weren’t swimming, we were eating or napping. We really enjoyed this trip with just the 3 of us.

Wow, what a year. It looks like the only months we didn’t have a trip was April, September, and December. (And I’m guessing my husband may have traveled some of those months for work- I don’t track his trips, just my own.) This was a record year of travel for us. Check out more of our vacation photos on Instagram and on Facebook.  How did your year pan out??  What was your most memorable vacation memory or trip?